Dynamics and predictability for typhoons
Updated ：2022/11/16

El Ni？o-Southern Oscillation (ENSO) is one of the most important factors that affecting tropical cyclone (TC) activity over the western North Pacific (WNP). It can modulate TC activity through either oceanic thermodynamics or air-sea interaction. ENSO also shows considerable complexity for the spatial-temporal characteristics. A new type of short-duration El Ni？o is found to shift the TC rapid intensification occurrence position westward by ~8° in longitude during their decaying years (Guo and Tan 2018a, 2020, 2021). The westward transport of the upper ocean heat takes the major responsibility for such westward shift of RI occurrence position. The air-sea interaction processes can maintain the ENSO related Hadley circulation anomaly from spring to summer and influence TC activity. It is found that the spring Indo-Pacific Hadley circulation asymmetric mode could persist signals to summer by the wind-evaporation-SST feedback and Gill-type response and influence TC genesis and intensity through modulating large-scale environmental conditions (Guo and Tan 2018b). Furthermore, the western Pacific Hadley circulation asymmetric mode is strongly modulated by a combination effect of ENSO and the background SST annual cycle (Guo and Tan 2018c). The imacts of ENSO on Hadley circulation asymmetric mode is mostly sensitive to ENSO zonal extent and intensity (Guo and Tan 2018d, 2018e).

Large-scale environmental vertical wind shear contributes one of the most important sources of uncertainty for the prediction of tropical cyclone’s (TC’s) intensity and structure change. It is typically measured as the difference between the mean wind vectors at 200 hPa and 850 hPa. This metric has been widely used in the operational TC forecast, as well as the theoretical studies and idealized numerical simulations. However, the vertical wind shear is far more complicated than such a simplification as unidirectional. In the real atmosphere, the large-scale vertical wind shear continuously changes its direction and magnitude with height and thereby is directional. Directional shear can be measured by the tropical cyclone relative environmental helicity (TCREH) and has significant impact on the structure and intensity change of TC: clockwise rotating shear with positive TCREH favors more effective symmetrization of convection and faster intensification of TC (Gu et al. 2019). The fundamental physical mechanism can be attributed to the cooperation of balanced dynamics in response to the height-dependent vortex tilt (Gu et al. 2018) and the diabatic coupling from moist convection (Gu et al. 2019): convection is favored in the downwind region when the low-level vortex leads the overall vortex tilt in clockwise rotating wind shear, and faster the precession of tilted vortex into the up-shear region through the positive feedback from moist diabatic heating. The new findings indicate the importance of relative configuration between the low-level vortex tilt and the overall vortex tilt under complicated vertical wind shear and thereby suggest a potential dynamical metric to improve the prediction of TC intensification. 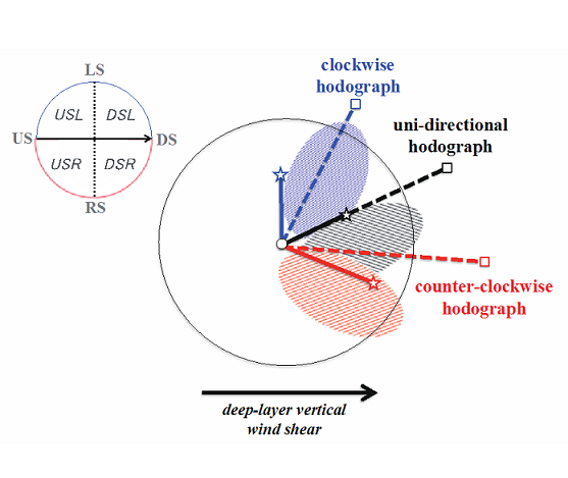 3. Observation and modeling of diurnal cycle of TC structure, intensity and convection

Typhoons are often topped by flat anvil-shaped clouds. Under the correct conditions, the region with the greatest upward motion can penetrate the cloud anvil, leading to an overshooting top (OT). Previous studies have suggested that OTs behave differently from anvil clouds and that the warming induced by OT is important in the intensification of typhoon. Although a higher rate of typhoon intensification during the night is well established, it remains unknown whether there is relationship between the frequency and density of OT and the intensity and intensity change of typhoon over the course of each day. Observations from the Himawari-8 satellite showed that there are more OTs occur in strong typhoons and rapid intensification typhoons. Rapid intensification typhoons have the greater diurnal variations of OT occurrence, with the maximum in the early morning and the minimum in the afternoon (Sun et al.2021). This is consistent with the diurnal variations of the intensification rate of typhoon and provides direct observational evidences of the relationship between tropical cyclone intensification and deep convection (Tang et al. 2019). OT frequency per unit area in typhoon can be a potentially reliable indicator to estimate diurnal changes of typhoon intensity and could be used to improve forecasting of typhoon intensity in the future.

Figure. Overshooting tops density as a function of the normalized radius for the (a) All, (b) T0, (c) T1, and (d) T2 samples in RI typhoons during the day (red lines) and night (blue lines). T0, T1 and T2 are from weak to strong intensities. The error bars in each case show the standard errors.

4. Mechanism of convective self-aggregation and its role in tropical cyclone genesis

Based on numerical models, people find out that with interactive radiation, convection tends to self-aggregate with the environmental condition in the tropics, which is referred to as convective self-aggregation. Self-aggregation of convection is be considered as a co-development of the dry patch amplification and the wet patch contraction from an initial uniform moisture and temperature field, indicating that the tropical background favors the upscale cascade of convection. During convective self-aggregation, interactive radiation is of central importance. With radiative cooling in the dry areas, the positive pressure anomaly in the dry patch boundary layer induces an intensifying subsidence due to mass continuity, which increases air density and is further responsible for the continuous drying. A boundary layer dry-subsidence feedback is revealed during the initiation of the dry patch (Yang and Tan 2020b).  It is also revealed that interactive radiation can bring forward TC genesis by accelerating the development of the pre-existing mid-level moist vortex before TC genesis. The radiative warming anomaly in the tropical cyclone region helps induce more non-convective upward water vapor flux and results in more heating at high levels and more cooling at low levels, leading to the increase of the vertical diabatic heating gradient and the intensification of the mid-level moist vortex (Yang and Tan 2020a).

Figure. A schematic diagram showing cloud-radiative mechanism. Pathway 3+ is the mechanism proposed by Yang and Tan (2020a), that the radiative heating difference between the disturbance region and the environment can accelerate the midlevel circulation.

Secondary eyewall formation (SEF) is frequently observed in intense tropical cyclones, which contains two basic features: a secondary convective ring and secondary tangential wind maximum. Dynamics of the two features are relative independent. Outer rainbands (ORBs) are found to be the triggering mechanism for the formation and coupling of two features in SEF (Wang and Tan 2020). The stratiform heating of ORBs locally enhances the boundary layer (BL) inflow and reinforces BL convergence, which initiates pathways of the two features. In the wind-maximum pathway, BL convergence locally enhances the relative vorticity, which increases the radial advection of absolute vorticity and forms supergradient force. Supergradient force sharpens the radial convergence in return, forming the positive feedback among the BL convergence, supergradient force, and relative vorticity, which persistently accelerates the BL tangential wind and leads up to the wind maximum pathway. Meanwhile, BL convergence contributes to the ascending motion above the BL through frictional updraft within BL and supergradient force above the BL, leading to the secondary convective ring pathway. Sensitivity experiment dominated by inner rainbands develops into a “fake-SEF” without secondary tangential wind maximum, since the radial advection of absolute vorticity is overtaken by the larger diffusion of inner-core region. In summary, ORBs triggers SEF through unbalanced response within and above the BL, demonstrating a ORBs-BL interaction mechanism of SEF.

6. The predictability on tropical cyclone tracks

A recent essay (Landsea and Cangialosi, 2018) note a diminishing trend in the reduction of errors in tropical cyclone forecasts so they raised the question “whether we have reached the limit of predictability for tropical cyclone track prediction.” It is very important to answer this question as if that's true, there's little we can do to improve TC forecasts as an incorrect position affects the utility of all other guidance, including wind, precipitation, and storm surge guidance. To answer the question, Zhou and Toth (2020) explored the past trends in the reduction of tropical cyclone forecast track error and to see how such errors may be further reduced in future decades. Two key findings are that (1) the true forecast track error (i.e., the difference between forecast position and actual position of tropical cyclones) increases exponentially as a function of forecast days, while (2) initial and forecast errors are reduced exponentially over the years. This indicates that the sustained expenditures and talent invested into the development of the NWP observing, data assimilation, and modeling systems provides a steady force, yielding consistent improvements, leading to about a day extension of skill over a period of 10 years. Combining the work of Zhang et al. (2019), it obtained that one day per decade extrapolated gain in skill may hold for at least 25 years into the future. 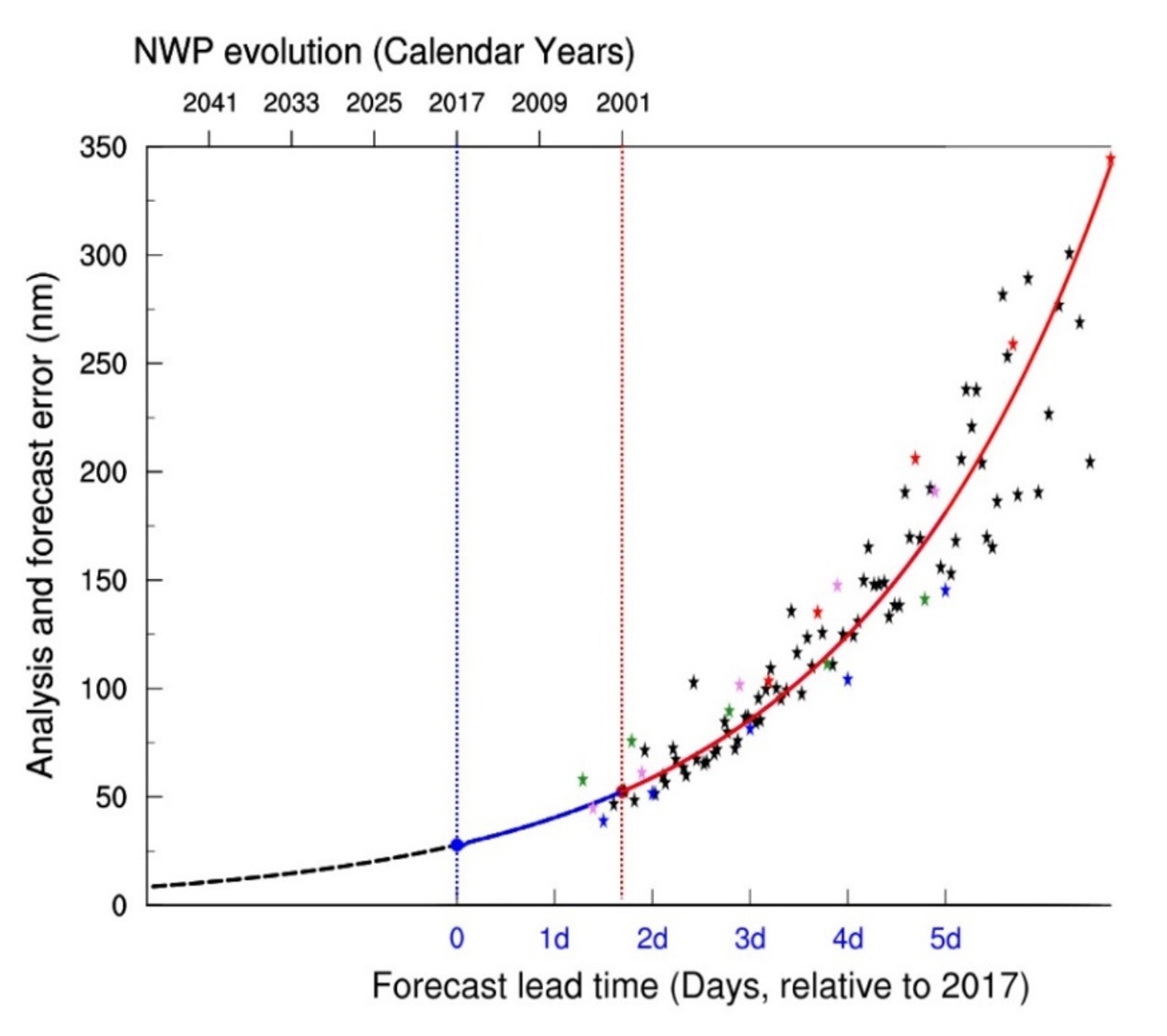 Figure. Exponential growth of true TC positional fore-cast error and exponential reduction of true analysis error as a function of lead time (days; bottom horizon-tal axis) and years (top horizontal axis), respectively, estimated for the past (solid line), and extrapolated into the future (dashed line) using the best estimate from a four-parameter error model. The red and blue dots indicate the estimated initial (analysis) er-ror in 2001 and 2017, respectively. A comparison of the bottom and top horizontal scales indicates (cf. red and blue vertical dotted lines) that the lead time of forecasts with any given skill increased by about 1 day per decade in the past. For reference, seasonal mean per-ceived positional error measurements are also shown as black stars for the developmental period (red and blue stars for 2001 and 2017, respectively), and pink and green stars for the independent 2018 and 2019 seasons, respectively.